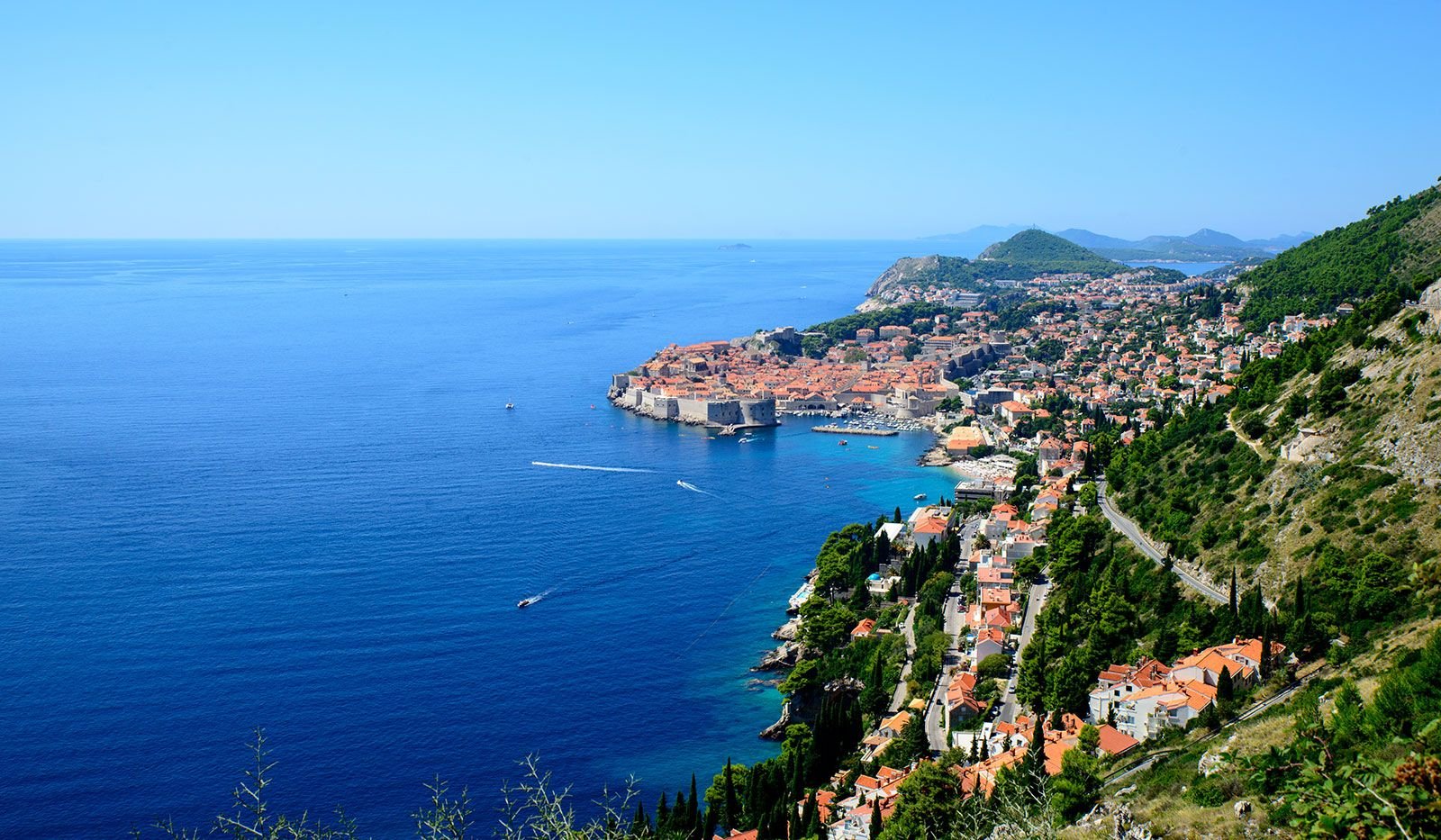 Croatia is a country situated in south-central Europe and the Mediterranean region. Tourism is a major industry in Croatia and it received over 20 million tourist visitors in 2019. Tourism in Croatia is concentrated in the areas along the Adriatic coast and is strongly seasonal, peaking in July and August.

The country has a rich historical and cultural heritage, and natural beauty. Its greatest advantage in terms of tourism is its Adriatic Sea coast which, according to the 2010 European Environment Agency’s survey, had the second cleanest water in all of Europe.

Dubrovnik, Rovinj, Poreč, Split, Medulin, Umag, Vir, and Mali Lošinj have been the most popular destinations in 2019.

One of the main attractions of Dubrovnik is its walls with over 1.3 million visitors in 2018. The walls run almost 1.2 miles around the city and are 13–20 feet thick on the landward side but are thinner on the seaward side and it was built to protect the vulnerable city. The walls of Dubrovnik have also been a popular filming location in the HBO television series, Game of Thrones. 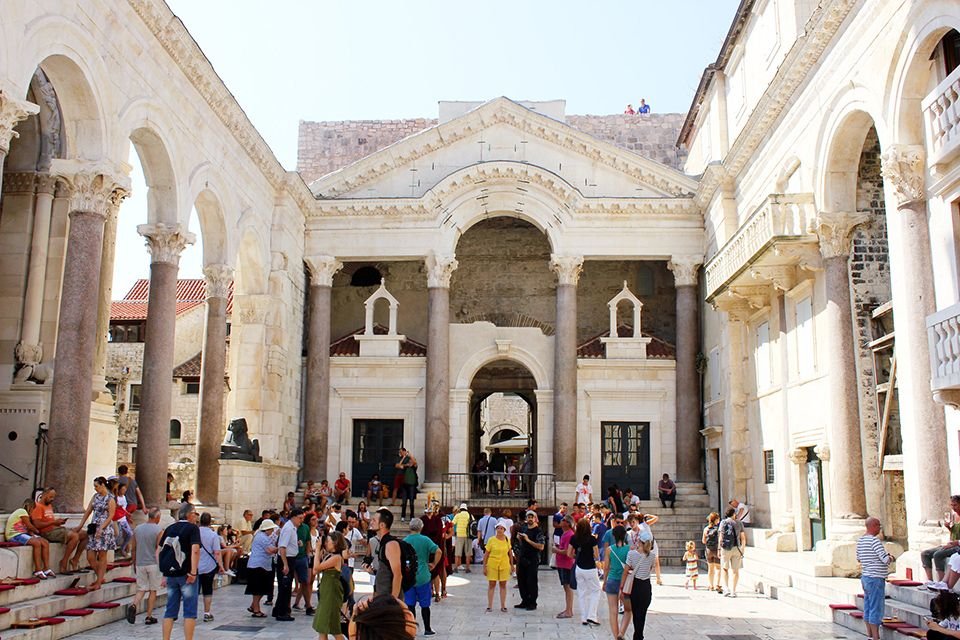 Diocletian’s palace is certainly the main attraction of the city of Split the palace is listed by UNESCO as a World Heritage Site.

These ruins are some of the most valuable surviving buildings of the Roman era on the Adriatic coast and one of the most famous and complete architectural and cultural features. The palace is well preserved with all the most important historical buildings, in the center of the city of Split. 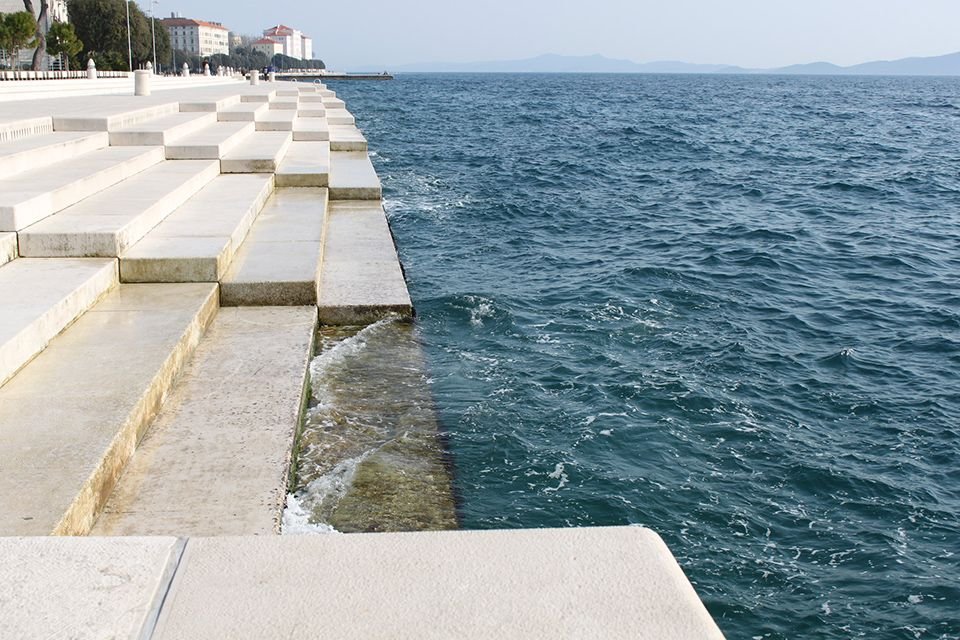 In the Croatian seaside town of Zadar, an architectural sound art object, which plays music by way of sea waves and tubes located underneath a set of large white steps leading into the water.

Concealed under these steps, which both protect and invite, is a system of polyethylene tubes and a resonating cavity that turns the site into a large musical instrument.

The Sea Organ won the prize of the fourth edition of the European Prize for Urban Public Space. This masterpiece of acoustics and architecture was created by expert Dalmatian stone carvers and architect Nikola Basic in 2005. 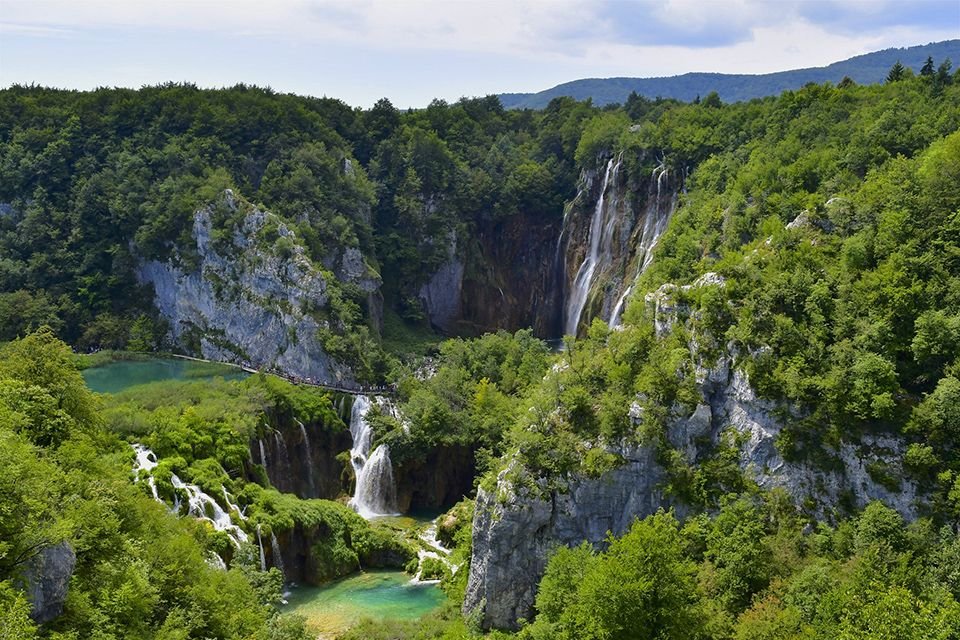 Plitvice Lakes is the oldest and largest national park in Croatia. The national park was founded in 1949 and today is added to the UNESCO World Heritage.

The most attractive part of the park is the lakes. The National Park’s lake system is comprised of sixteen lakes, inter-connected by a series of waterfalls and covers a total area of 300 square kilometers. The forests in the park are home to bears, wolves and many rare bird species.

These natural dams have created a series of beautiful lakes, caves, and waterfalls have been created from the waters flowing over the limestone and chalk have, over thousands of years.

Hvar is a city and port on the island of Hvar. A few of the treats to make you enjoy on this island are gorgeous beaches with tiny inlets and secluded coves, lush vineyards nestling at the foot of ragged mountains, boutiques, luscious restaurants, and a vibrant nightlife amidst the medieval streets of Hvar Town.

Hvar has the sunniest hours of all the islands in the Adriatic Sea. Tourism has continued to grow and is now a significant contributor to the island’s economy.

Many notable domestic and foreign architects have left their footprint in Hvar through time. 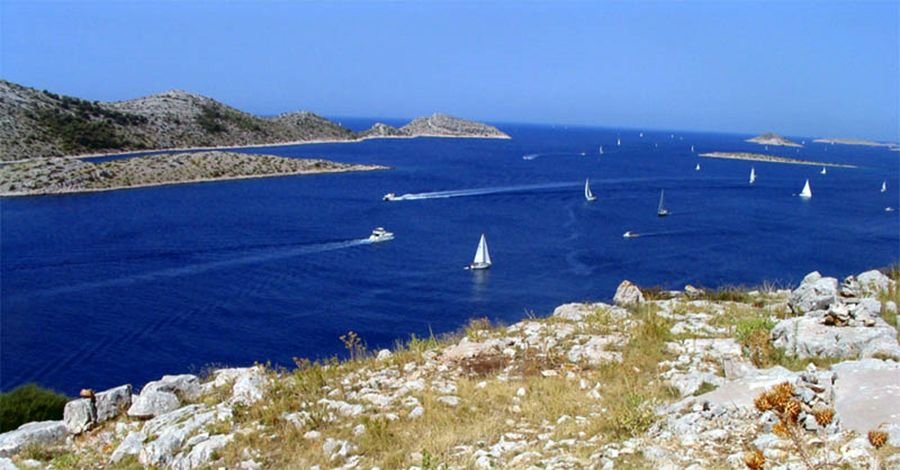 The Kornati islands are an archipelago consisting of 140 islands covering an area of 114 square miles and most of them are part of the Kornati National Park.

There are no permanent settlements in Kornati and most of the area belongs to the people of Murter island. There have been 200 known varieties of Mediterranean plants, many scented and medicinal herbs: sage, feather grass, and Xeranthemum, giving a fragrant spring. Olive trees account for about 80% of the land under cultivation, followed by vineyards, figs, orchards and vegetable gardens. 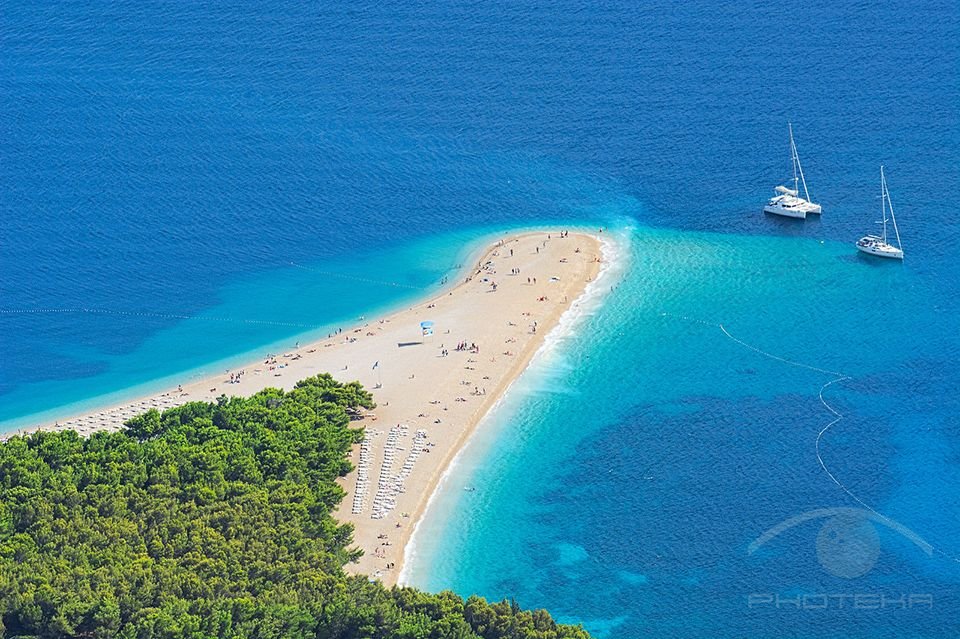 Zlatni Rat has been regularly listed as one of the top beaches in Europe and the most popular beach on this side of Adriatic. The surrounding waters are usually cool and clear, due to the current in the Hvar Channel.

The water surrounded Zlatni Rat is deep blue and turquoise sea, while the center of the beach is covered with forest, restaurants and beach bars. You can enjoy a remarkable sight, especially when viewed from the cliffs above. 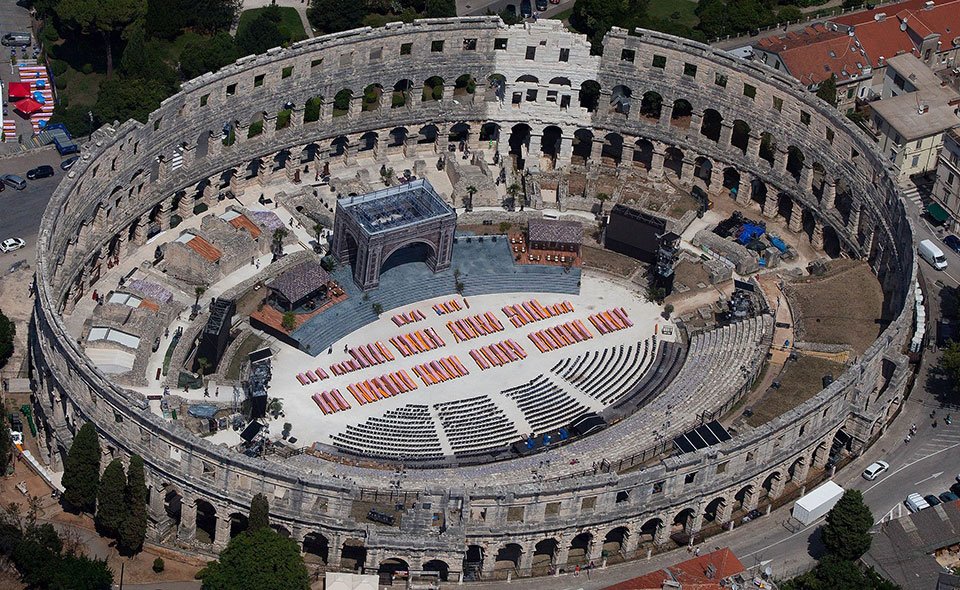 Pula Arena is a Roman amphitheater located in Pula. The Arena was constructed in 27 BC – 68 AD and it is the only remaining Roman amphitheatre to have four side towers and with all three Roman architectural orders entirely preserved.

Gladiator fights took place in the central flat area called the arena and applauded by about 20,000 spectators. The Amphitheater was constructed by the use of local limestone.

In recent years the arena has been used as a venue for many concerts and has also been used for cinematic works.

The Mljet National Park is the oldest marine protected area in the Mediterranean and it has been protected area for over 50 years. The park is a large area that borders two saltwater lakes.

The entire surface area of the park is extremely rich with life, and numerous endemic and endangered species. You can visit Mljet National Park by boat from Dubrovnik, Split and Pelješac.

The Benedictine monastery located at one of the most beautiful locations in these areas, on the island of St. Mary on Veliko jezero is also the most visited location of the National Park. 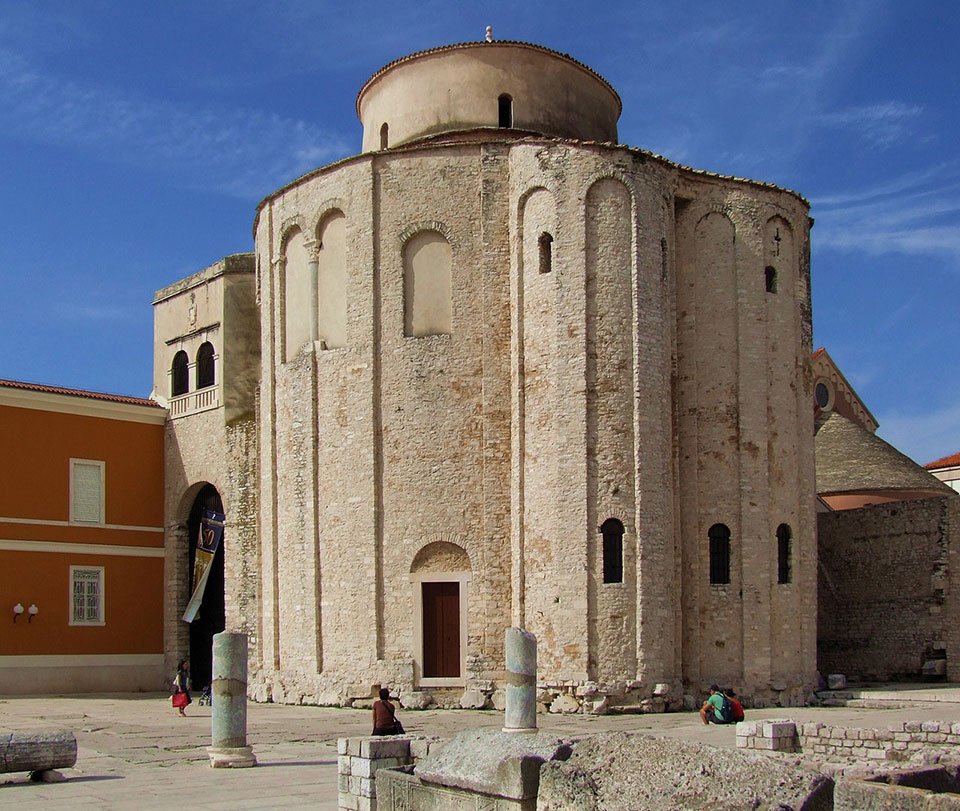 Zadar has been urbanized ever since the Roman Empire. A charming and Romanesque city Zadar is also well known for having many attractive Romanesque churches. A trip to Zadar won’t disappoint you. You can visit many historical places including the Episcopal complex with the cathedral of St. Anastasia, the archbishop’s palace, the church of St. Donatus and the Zmajevic seminary, the orthodox church of St. Elias, the Benedictine nunnery with the church of St. Mary and the Permanent Exhibition of Religious Art, and the Archaeological Museum.

We hope you like this post and don’t forget to check some of our other articles about European travel destinations.