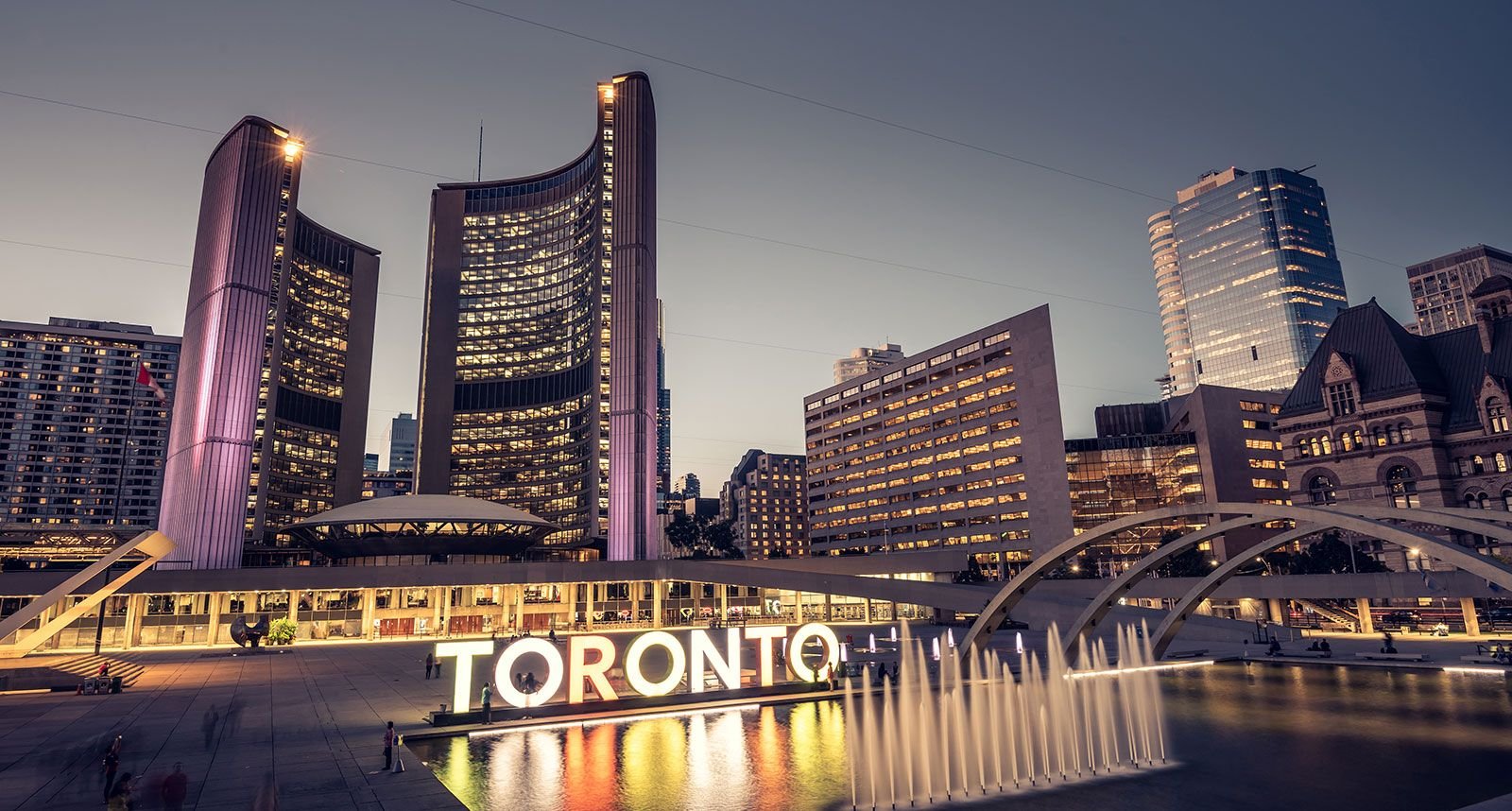 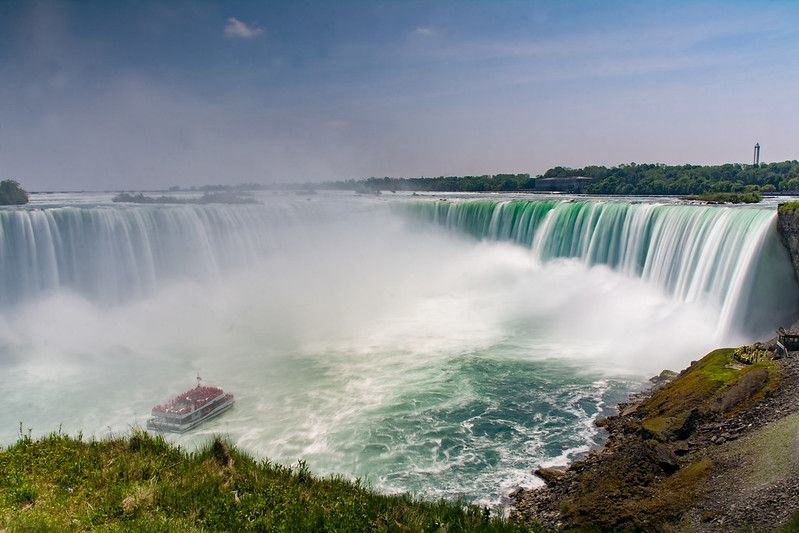 Niagara Falls is a city in Ontario, Canada, located on the western bank of the Niagara River in the Golden Horseshoe region of Southern Ontario. Niagara Falls is a popular and touristy destination on the USA-Canada border, between Lake Erie and Lake Ontario. The Horseshoe Falls is the largest of the three and often called the “Canadian Falls”. The other two are called The American Falls, the Bridal Veil Falls.

The combined falls form the highest flow rate of water falling every minute of any waterfall in the world. Tourism plays a major role in the economy of the region and of course, the main attraction is Niagara Falls. The area includes observation towers, high-rise hotels, souvenir shops, museums, indoor water parks, casinos and theatres.

Hundreds of LED lights are housed in three locations across the Niagara Gorge in Niagara Falls and are illuminated every night of the year. 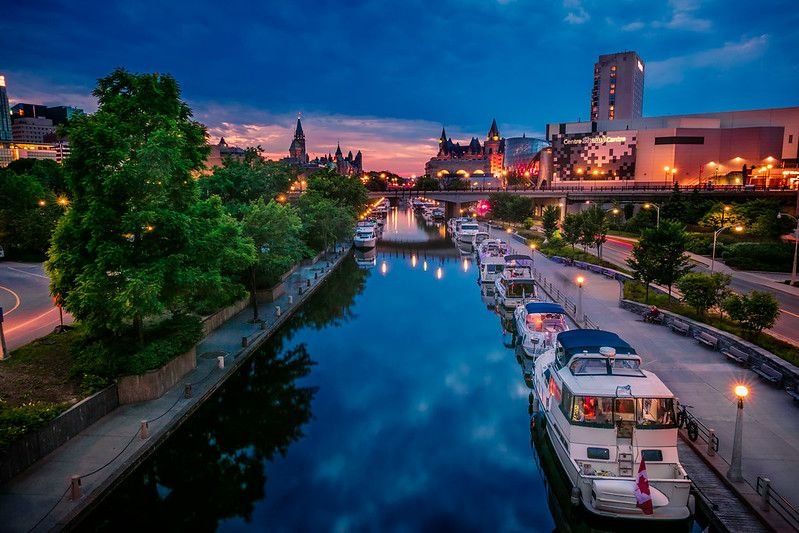 One of the most amazing destinations in eastern Canada is the Rideau Waterway. It connects Canada’s capital city of Ottawa, Ontario, to Lake Ontario and the Saint Lawrence River at Kingston. The canal system includes two rivers, the Rideau and the Cataraqui, as well as several lakes. In 2007 it was declared as a UNESCO World Heritage Site and it is the oldest operated canal system in North America.

Your Rideau Canal adventure can start with a visit to the Bytown Museum for an overview of the history of Ottawa from the construction of the canal. There are several museums along the Rideau Waterway worth mentioning including Heritage House Museum, Smiths Falls Railway Museum, Rideau District Museum, Matheson House – Perth Museum. In winter, a section of the Rideau Canal passing through central Ottawa becomes officially the world’s largest and second longest skating rink, which winds its way through downtown Ottawa. The Skateway is open 24 hours a day and the length of the season depends on the weather. 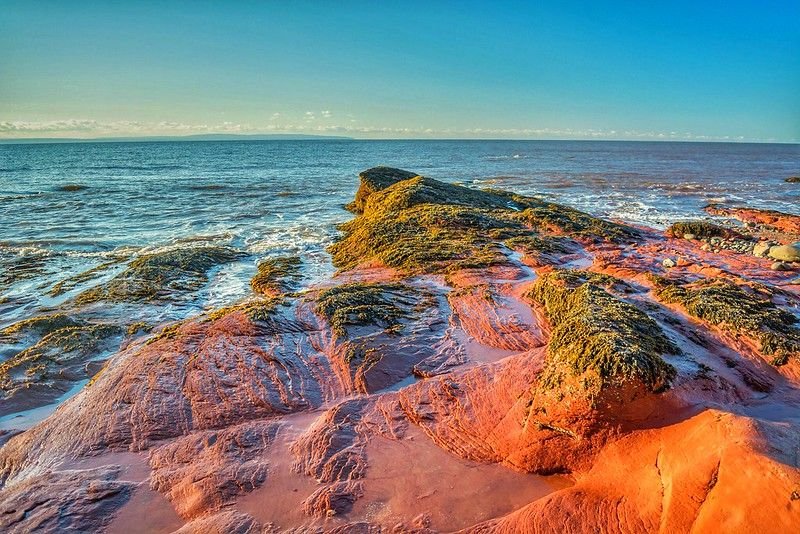 The Bay of Fundy is one of the wonders of North America, located between the Canadian provinces of New Brunswick and Nova Scotia. It covers 3,600 square miles and the Bay of Fundy is known for its tides. Over 160 billion tonnes of water move in and out of the Bay of Fundy, every day. According to the Guinness Book of World Records is the highest recorded tides in the world.

There are also several islands with Grand Manan Island the largest of the Fundy Islands in the Bay of Fundy. Whale and bird watching, camping and kayaking are popular activities for tourists. 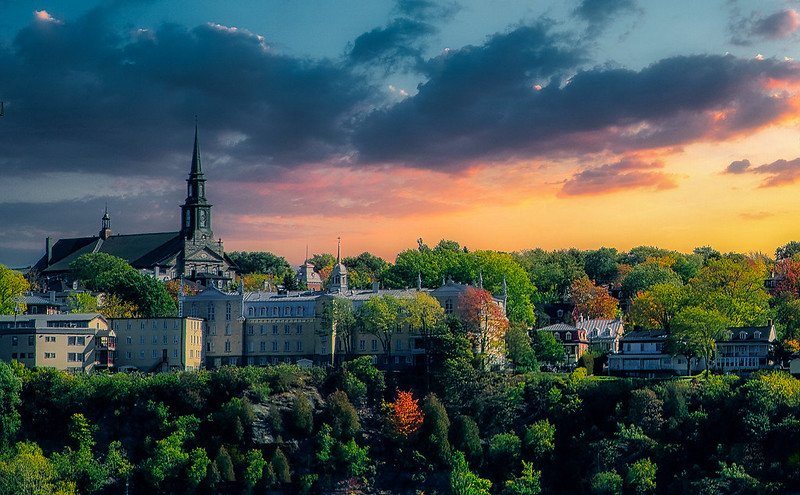 Québec City has a number of historic sites, art galleries and museums, include the National Assembly of Quebec, the National Museum of Fine Arts of Quebec, the Citadelle of Quebec and the Musée de la civilization.
Quebec City’s main sight is the Old Town. Old Québec is a UNESCO World Heritage treasure and one of only two cities in North America besides Campeche in Mexico with its original city walls.

Quebec City is known for its Winter Carnival, its summer music festival and its Saint-Jean-Baptiste Day celebrations. Outside the city, you’ll find other tourist attractions include Montmorency Falls, the Mont-Sainte-Anne ski resort, the Basilica of Sainte-Anne-de-Beaupré, and the Ice Hotel. 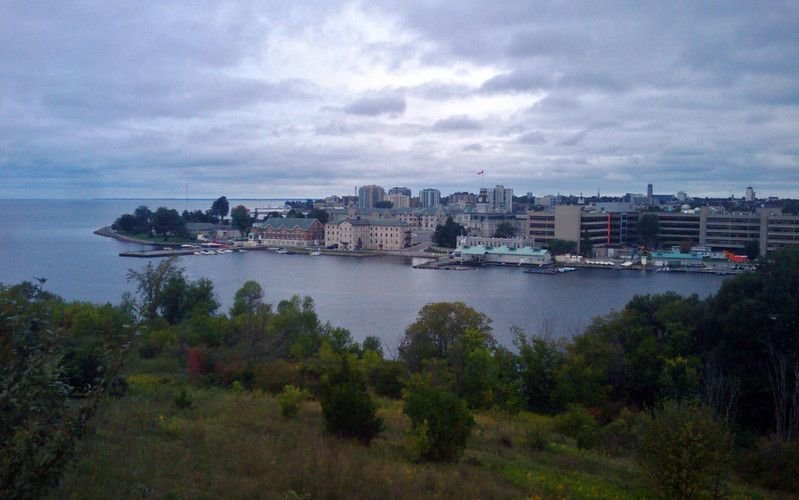 Kingston is a city in Eastern Ontario, Canada, located on the eastern end of Lake Ontario, where the lake flows into the St. Lawrence River. There is a lot to do and see in Kingston including the Thousand Islands, which is a tourist region nearby to the east, Rideau Canal National Historic Site of Canada – a UNESCO world heritage site, the oldest continually running market in Canada – Kingston Public Market.

Kingston is also known as the “Limestone City” because of the many heritage buildings constructed using local limestone, such as the lakeside Kingston City Hall. The city offers a blend of historic landmarks, museums, such as Fort Henry National Historic Site, Bellevue House, Penitentiary Museum, Pump House Steam Museum, many churches, picturesque neighborhoods, 19th-century fortifications and filled with an abundant number of restaurants and pubs. Cruising the Thousand Islands, The Grand Theatre and Leon’s Centre is something that also needs to be on your list.

The most interesting area in Kingston is near the downtown core of the city. Some of the historic properties include World Heritage Sites, National Historic Sites, Provincially Significant sites. Kingston hosts several festivals during the year, including the Kingston WritersFest, Limestone City Blues Festival, the Kingston Canadian Film Festival, Artfest, Kingston Jazz Festival, and others. 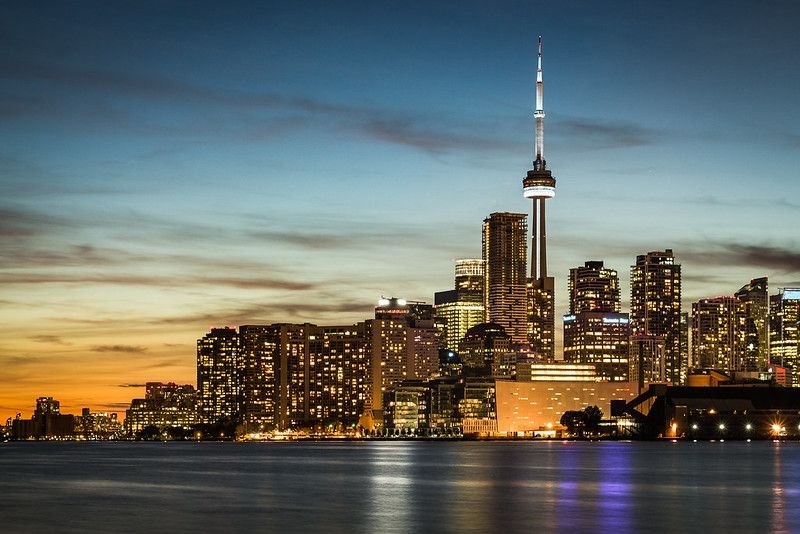 Toronto is Canada’s largest municipality and the fourth largest city in North America. Toronto is one of Canada’s leading tourism destinations. If you want to explore Toronto shopping malls check out two of Toronto’s unique shopping districts: West Queen West and Kensington Market.

Other attractions include the Toronto Zoo which is home to over 5,000 animals which represent about 500 different species, the Art Gallery of Ontario with a large collection of African, European and Canadian contemporary artwork. Greektown is home to the annual “Taste of the Danforth” festival which attracts millions of people. 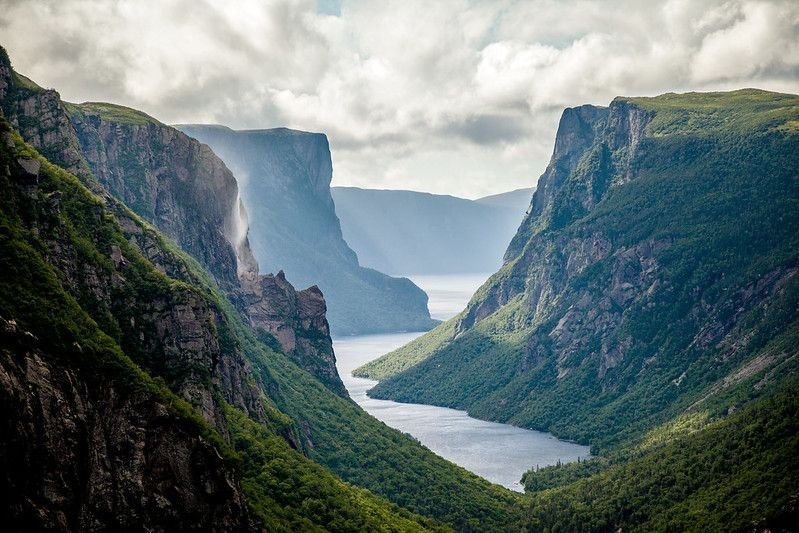 One of the most popular activities at Gros Morne is hiking trails. There are about 20 marked day trip trails, exploring coastal and interior areas of the park.
The park host many arts festivals, including Writers at Woody Point, Gros Morne Theatre Festival, Gros Morne Summer Music.

Exploring the park will present you to some spectacular scenery, created by the water through fjords carved by glaciers millennia ago, with coastal lowland, alpine plateau, glacial valleys, sheer cliffs, waterfalls, and many pristine lakes. 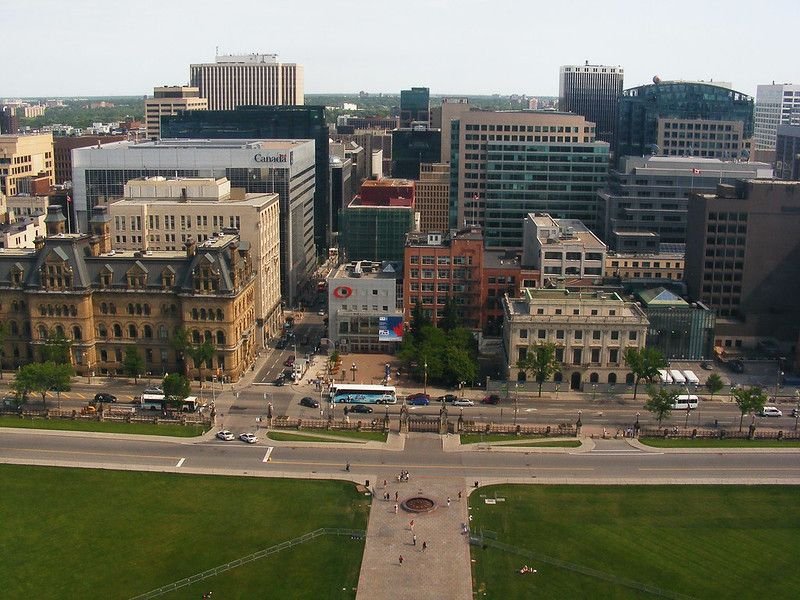 Ottawa has the most educated population among Canadian cities. The primary attraction for most visitors is 1 Parliament Hill. There are many national museums and galleries in Ottawa and neighboring Gatineau, including the National Arts Centre, the National Gallery, where you’ll find special exhibitions and stunning national collections from Canada and around the world.

Ottawa is host to over 60 festivals and events per year, including the Ottawa Jazz Festival, Ottawa International Chamber Music Festival, one of the largest in the world Bluesfest, The Tulip Festival. 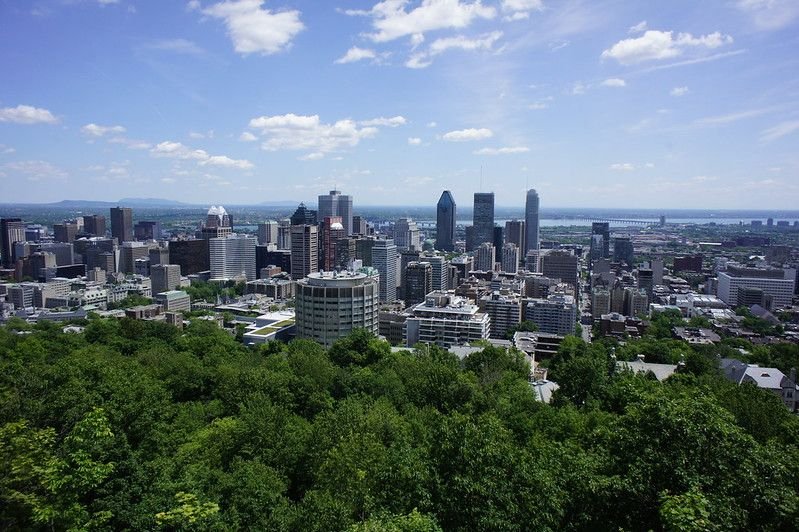 This French-speaking unique and fascinating city offers exciting entertainment and cultural diversity. It has more than 100 annual festivals, the largest being the Montreal International Jazz Festival.
The main sectors that attract tourism in Montreal are Festivals, museums and Old Montreal bringing million tourists. If you are a night life-lover Crescent Street is known better for its nightlife with many nightclubs and bars as well as Saint-Laurent Boulevard and the surrounding Plateau Mont-Royal neighborhood.

Old Montreal is a historic area southeast of downtown and home to the majority of historical buildings, dating back to the 17th century, such as Old Port of Montreal, Place Jacques-Cartier, Montreal City Hall, the Bonsecours Market, Place d’Armes, Pointe-à-Callière Museum, the Notre-Dame de Montréal Basilica.

The city has the largest number of restaurants per resident in all of North America. 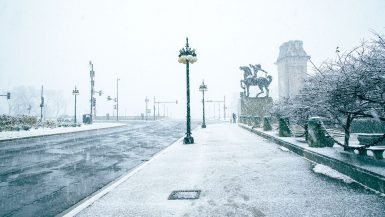